The first time, the latest

In 2020, the global market has experienced severe volatility. Affected by the new crown epidemic, both the international economic environment and the Chinese steel industry are facing huge challenges. 2020 is about to pass, and the prelude to 2021 has already begun! Will the turbulent steel market at the end of the year continue into 2021? Can we have a good start after New Year's Day? please watch the following part!

Looking back at the steel price trend in 2020, as a whole, the impact of the black swan new crown epidemic has been steadily passed, but the industry's profits have declined as a whole. Steel prices continued to rise in the second half of the year. Steel prices remained relatively high in the past five years. However, the profitability of the market was declining. The market rose and fell rapidly, discouraging businesses. If the steel market in the first half of the year is "not frightening", the steel market in the second half of the year will be able to use the characteristics of "ups and downs" and "not prosperous in peak season, not low in off-season". Especially since October, futures steel has risen by more than 1,000, and finished products fluctuated by nearly 1,000 yuan. 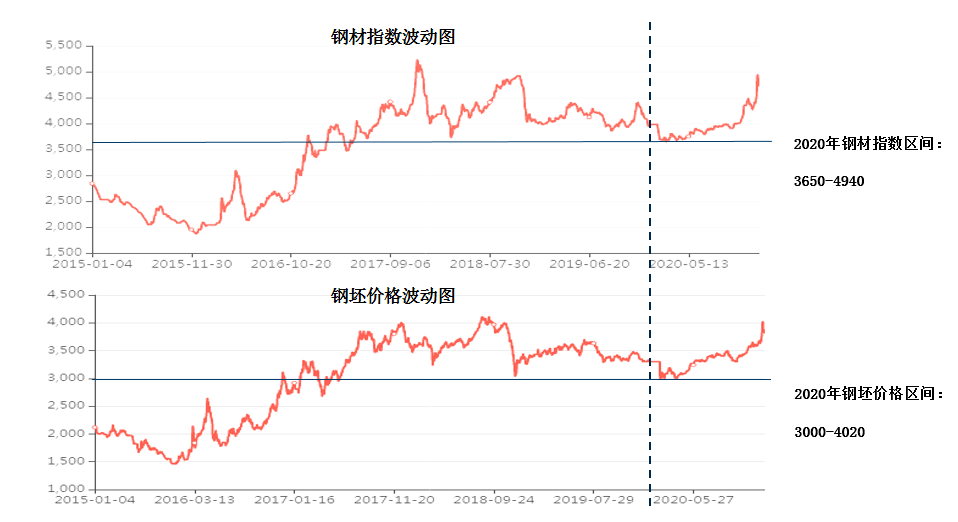 In 2021, with the control of the new crown epidemic, the trend of sustained economic recovery will not change. Both the international market and the recovery of China's economy will bring positive support to the steel industry. However, it needs to be considered that the "British Super" new crown epidemic has triggered a new round of economic recovery concerns. The degree of epidemic control determines the speed of future economic recovery. Therefore, the global economy will still be in a state of incomplete recovery in 2021, and there is still a gap from the level before the epidemic. For the steel industry, risks and opportunities still coexist.

According to the forecast of the International Monetary Fund (IMF), the global economy will emerge from this year's recession in 2021. The global economic growth rate is expected to reach 5.4%, and China's economic growth will reach 8.2%. Once the epidemic is effectively controlled, major global economies will make every effort to resume work and resume production to stimulate the economy. The external demand in the steel sector will also increase. At the same time, international steel prices have upward momentum, which will further benefit the boost in domestic steel prices.

The prevention and control of the epidemic still faces challenges

However, the prerequisite for the continued recovery of the global economy is that the epidemic can be effectively controlled. At present, the European Union and other economies have begun vaccination. According to the World Health Organization, only 70% of the world's population can be vaccinated to ensure the end of the epidemic. At present, there is still a large gap between vaccine production and market demand, and the recent spread of the "Super New Crown" in the UK has also brought challenges to domestic and foreign import prevention. It means that while the economy will recover next year, it will still be affected by the uncertainty of epidemic prevention and control.

China's macroeconomic regulation does not make a sharp turn

In addition, the China Central Economic Work Conference held in December sets the tone for the economic work deployment in 2021. Two aspects are worthy of attention:

First, the macro-control should maintain the necessary support and not make a sharp turn. It means that next year's stability, especially monetary policy, will not be significantly tightened even in the context of sustained economic recovery, which will give the market a reassurance. Regarding fiscal policy, due to the greater fiscal strength such as the addition of special bonds this year, but taking into account the financial pressure of local governments, a small reduction in the scale of special bonds will not be ruled out next year.

Second, China's domestic recycling-based economic model determines that policies related to expanding domestic demand will continue to exert force next year, including the promotion of automobile consumption and other aspects, which will drive manufacturing demand.

The core that affects the price of steel is still the change in the structure of supply and demand, and the impact of demand is dominant. According to the proportion of steel demand, infrastructure investment, real estate and manufacturing are the main areas that affect the amount of steel used.
Demand for steel is expected to rise further
From the perspective of investment growth in the three major areas of infrastructure, real estate, and manufacturing this year, after the impact of the epidemic in February fell sharply, with the effective control of the domestic epidemic, March ushered in a rebound and continued to rise. Infrastructure investment and real estate have accumulated year-on-year Both turned from negative to positive, increasing by 1% and 6.8% respectively over the same period last year.
The manufacturing sector's decline has also continued to narrow. From a single-month data point of view, the growth rate of investment in the three major sectors was slightly differentiated in November. The manufacturing industry recovered the fastest, with a year-on-year growth rate of 8.8 percentage points increasing to 12.5%, while the year-on-year growth rate of infrastructure investment and real estate investment slowed slightly. .

Infrastructure investment picks up steadily in 2021

Since the second half of 2020, real estate control policies have been significantly tightened, and both purchase restrictions and loan restrictions have put pressure on the property market. At the same time, the "three red lines" of the new real estate financing regulations issued by the People's Bank of China and the Ministry of Housing and Urban-Rural Development in September have further increased the building market. Weakening expectations. At present, the policy is only implemented in 12 pilot companies. It will be gradually implemented in full from next year, which means that the scale of interest-bearing liabilities in the real estate industry will be strictly controlled, the industry's willingness to withdraw funds will increase, and the willingness to further invest will weaken. The current land market With continued cooling, signs of slowing investment have already appeared, and the 14th Five-Year Plan continues to emphasize "housing and housing not speculation". The direction of stabilizing the property market in 2021 will not change.

From the data point of view, the newly started area of houses reflects the steel consumption in the 3-18 months. The cumulative decline from January to November is 2% year-on-year, and the decline has narrowed by 1.9 percentage points. Based on the land stock this year, the overall pull of the steel market by the property market next year will be relatively stable.

Manufacturing investment continues to accelerate, and the growth rate of manufacturing in the industrial added value is as high as 7.7%, the highest since April 2019. Specific to the relevant demand areas of the board category, there is a good performance. Among them, the sales of excavators in the first three quarters exceeded the level of the whole year of 2019. In November, automobile production and sales reached new highs during the year. The export and output of household appliances continued to improve, and the shipbuilding industry continued to recover.

It is worth noting that since 2020, automobile consumption promotion policies have continued to increase, automobile sales have continued to rebound, and the automobile industry has entered the stage of active replenishment in the second half of 2019, and production is currently showing a continued recovery trend. According to the China Automobile Association's forecast, 2021 will maintain a slow growth trend, and both production and sales will achieve positive growth.

At the same time, in December, the "Implementation Measures for Capacity Replacement in the Iron and Steel Industry" has been promulgated, and next year may usher in a wave of concentrated production. According to the current capacity implementation, there is still room for nearly 20 million tons of crude steel production capacity to increase.

Affected by the COVID-19 pandemic, the pressure on the stockpile increased sharply from February to March this year, and high stocks became the norm. However, since October, demand has been supported and inventories have continued to decline. At present, steel mill inventories and social inventories have improved significantly.

Due to the current high prices, speculative demand has dropped significantly, and the transfer of factory warehouses to social warehouses will slow down slightly in the future. We will continue to pay attention to changes in inventories this winter. In the medium and long term, with the further recovery in demand in 2021, the overall pressure on the inventory will be relieved compared with this year.

The continuous rise of iron ore has become an important support for the high prices of finished products this year. Since December, the shipments of the three major mines in Australia and Brazil have fallen, and the total port inventory has changed from an increase to a decrease, down 2.84 million tons compared with the same period last year. The tightening of supply and demand has become one of the important reasons for the increase in iron ore. The Platts Index has now risen by more than US$160, compared to US$92 in the same period last year, which is a spread of more than US$60. In addition to the fundamental supply and demand gap, there is also a boost from the capital market.

With the digestion of this wave of capital market speculation, the partial replacement of iron ore by scrap imports in the future, as well as the control of overseas epidemics in 2021, and the acceleration of resumption of production and work, the high level of iron ore will face downward pressure. However, given the continued high level of domestic crude steel production and the expected boost to bulk due to the depreciation of the dollar, the room for iron ore prices to fall is relatively limited. The coke is currently eleven rounds of rising prices, and there is still support at the January high. Cost support is still strong.

In summary, the macroeconomic recovery will continue in 2021, and the recovery of the overseas economy will bring about a rebound in China's direct and indirect steel exports.

From the perspective of industry supply and demand, it will usher in a situation where both supply and demand will increase. The demand for sheet metal will be slightly stronger than that of building materials, and the total inventory pressure will be significantly eased compared with this year. In addition, the price of iron ore at the raw material end is under pressure, but the range is limited. Coke remains strong for a short time, and the trend of the raw material end still has strong support for the finished product next year. Therefore, Kaiming Bearing expects that the average price of steel products will move up overall in 2021, and the trend of plates is stronger than that of building materials.